Seasoned actress, Chioma Toplis has mocked a couple and bank staff that allegedly assaulted her at her home in Victoria Island, Lagos.

According to earlier reports that 36-year-old Vivian Okoro and her 36-year-old boyfriend Femi Omomeji who will be arraigned before an Igbosere Chief Magistrate Court in Lagos on January 11, allegedly assaulted the actress after she questioned them upon meeting them removing the switch from her meter. It was alleged that the injuries she sustained allegedly led to two bone surgeries on her left leg and attachment of a metal to the leg.

Serving an update on the case, Chioma Toplis insinuated that the couple have been remanded in Kirikiri prison.

Wow.. I didn’t know that I am this powerful to just throw a boyfriend and girlfriend @unionbank staffs into Kirikiri prison for doing absolutely nothing. 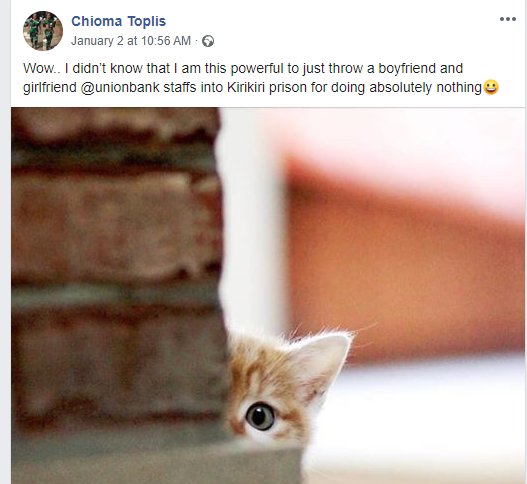