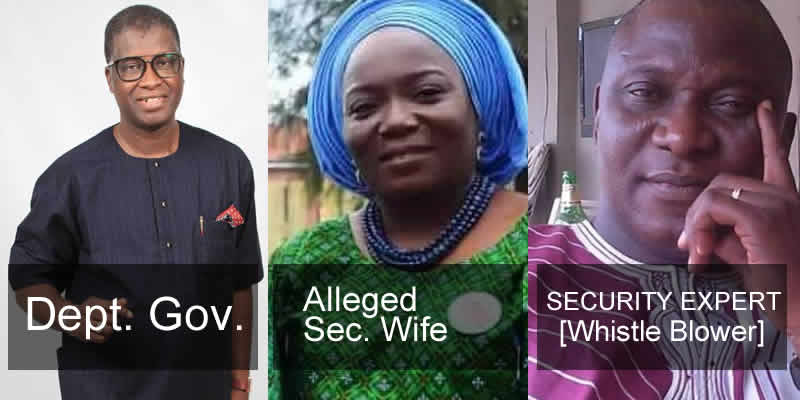 We could not perform fireworks before the Deputy Governor of Osun state, Gboyega Alabi gave us his own new year gift and what he would battle with throughout the new year.

The Deputy Governor of Osun state who is a native of Ikire released an official statement to alert the public that someone is impersonating his beloved wife and she has been buying things in his name without paying a dime.

Inside his statement, he said that he has never met this woman and warned the entire public to desist from interacting with her in the capacity of the wife of the Deputy Governor.

When I read the statement, I was rudely shocked and pondered on why the deputy governor of the state, a perfect and supposed intelligent man would be so low in drafting such statement. Impersonation is a great offence and if people who have no such power and authority like the Deputy Governor could arrest impersonators, why did the deputy governor allow his wife’s impersonator to live? Why didn’t he arrest her? Was she a second wife? Did they have anything in common? Have they shared bed before? Were they in love at a time? These were questions bothering my mind before pictures of the deputy governor and the said lady at various events surfaced.

Who released these photos? Akin Adeyi, the popular Ayeniromo Orunogbeke did. He is a security expert as far as I know and a developmental coach. Before he released those photos, he challenged the Deputy Governor of the state and requested that he appealed to the woman and sensibilities of Osun people he insulted with his press statement. Akin Adeyi disclosed that the woman in question, a native of Ondo state is like a wife to Benedict Alabi and stood behind him starting from his inglorious voyage to the top seat of the state before he became a beneficiary of a political coup.

Truly, lies expire in earth! Akin the son of Adeyi released the pictures of the deputy governor and the estranged woman smiling and gracing event together when the going was good. He concluded that Benedict Alabi has renewed his love with his America returnee and the same woman who left him to wander in political wilderness and appears when things seem to have settled.

I have once met with the deputy governor during our courtesy visit as online journalists to his office after his party emerged. He attended to us humbly and softly. He appeared gentle and he was so meek. When i heard the exchange between the duo, I was wondering what could have led this innocent and humble man to this but were women not responsible for the fall of great men in the past? My mind consoled my body.

Together with a close friend, I visited the Cinema situated in Ijebu-Ijesa inside the the same compound that housed TIMSED hotel. I watched the nollywood movie titled “Your Excellency”. There are similarities between the movie and the current state of things in the home of the Deputy Governor of Osun state. Funke Akindele supported his husband, raised support groups and took several measures to make him win. Titi Alabi is in Funke Akindele’s shoe and she even sat beside him on the swearing-in day just like Funke Akindele. Shaffy Bello was in abroad too just like the first wife. She tried all her best but she could not win the heart of her husband again and how she plans to win it has not been unravelled yet.

I surely know that the comeback of Shaffy Bello in that movie would be disastrous just like the coming back of first wife of the Deputy Governor of the state. I have once insulted the intelligence of Nollywood actors over production of poor films but the film titled “Your Excellency” that I watched which is a true narration of the state of things in homes of our public office holders has changed my mind. I love and respect you all.

Your excellency is no doubt an epic movie but it is a reality in Osun state. People have been silently discussing it in their respective homes. I would have kept quiet too but I could not take off my eyes away from the film I watched at the cinema. As I join other Nigerians most importantly the good people of Osun to watch as event unfolds between Akin Adeyi, Osun State Deputy Governor and the undefined lady, I say shalom and I take a bow.

Who is the fraudster? Did she buy goods without pay? What went wrong between the duo? Is Akin Adeyi lying? Can we say that Benedict Alabi is guilty of perjury? Is the lady a side chick turned wife? Is this a plot against the person of the Deputy Governor of the state? These are questions future will possibly provide answers too. Only if the speaker of Osun State House of Assembly is not sleeping…

Apagunpote Olayimika Chocomilo writes from Osogbo, the capital of Osun state. A columnist at WITHIN NIGERIA.