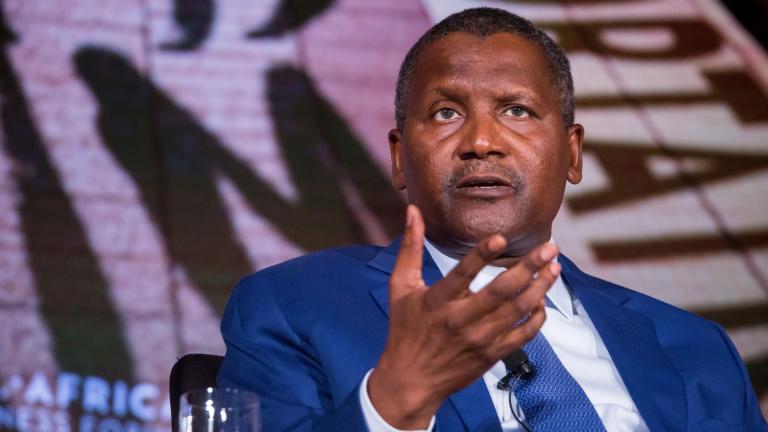 Mr Dangote, widely reputed as Africa’s richest man, ended the last decade with a net worth of almost $15 billion, according to the Bloomberg Billionaires Index.

The development makes the 62-year-old Nigerian businessman the 96th wealthiest man in the world, according to data from the index.

The billionaire mogul was born into a wealthy family of prominent traders in Kano. At a relatively young age of 21, Mr Dangote incorporated his own cement business. He has since diversified into manufacturing of different goods, spreading his tentacles across the African continent.

One of his numerous companies is the Dangote Cement Plc, a Nigerian multinational publicly traded cement manufacturer headquartered in Lagos. The company is engaged in the manufacture, preparation, import, packaging, and distribution of cement and related products in Nigeria and has plants or import terminals in about nine other African countries.

For years, the Dangote brand has been a recurring feature in the Nigerian economy. The brand has also extended its reach beyond the West African sub-region to other parts of the continent and beyond.

In the last decade, it has recorded feats in different significant areas of the economies of major countries across the continent.

In 2016, Dangote Industries Limited (DIL) bought Twister B.V., a company headquartered in the Netherlands delivering reliable, high-yield and robust solutions in natural gas processing and separation to the upstream and midstream oil and gas sectors. Twister’s unique separation capabilities are designed for augmenting production and streamlining processes, to capitalise on high-yield gas processing for maximising revenues.

Based on sophisticated patented technology, Twister gas plants are cheaper to build and operate compared to alternative technologies and deliver better performance. The company has customers in Nigeria, Malaysia, and South America. The acquisition at the time complemented DIL’s portfolio of investments in the upstream, midstream, and downstream segments of the sector.

Although it has not really been all smooth for the business mogul and his chain of companies, he has managed to stay afloat despite business uncertainties.

In April 2019, Olam submitted a binding offer to acquire 100% equity of DFM. Under terms of the transaction, Olam acquired all the outstanding and issued shares of DFM that it does not currently own through a Scheme of Arrangement.

Earlier, the Nigerian Stock Exchange had put shares of the company on full suspension. The loss-making company was subsequently delisted from the Main Board of the NSE.

Meanwhile, Mr Dangote is close to completing what has been described as one of the world’s largest oil refinery jn Nigeria. The plant is expected to impact Nigeria’s fuel consumption records and the local economy.

Last year, the businessman took delivery of the World’s largest single Crude Distillation Column at the refinery site in Lagos. The tower arrived Ibeju Lekki, Lagos, after spending four months on the sea. The equipment, built by Sinopec, had left a wharf in Ningbo, China, in July.

Apart from the plant, Mr Dangote is also constructing a fertiliser factory on the site.

In the same vein, to strengthen his cement production outfit, the businessman is equally embarking on some aggressive restructuring moves that could see Dangote Cement outperforming its competitors in the market.

Last week, the management of Dangote Cement Plc announced the appointment of Michel Puchercos as the new managing director of the company. The new MD’s appointment becomes effective on February 1, 2020, a disclosure notice by the company said.

Mr Puchercos’s appointment was made public after he resigned from rival cement company, Lafarge Africa Plc.

The Board of Lafarge Africa had earlier notified the investing public of the resignation of Mr Puchercos from the company as the Group Managing Director/Chief Executive Officer (GMD/CEO) with effect from January 17, 2020. Mr Puchercos served the company as an executive director on the board since April 1, 2016.

Lafarge is a leading Sub-Saharan Africa building materials company, dealing in cement, aggregates and concrete. It is also listed on the Nigerian Stock Exchange (NSE).