As Christmas draws near, media personality,  Noble Igwe has a word of advise for men from the Eastern part of Nigeria. Noble Igwe  believes it a notion that must be changed as according to him it has been in play for as long as he can remember.

Noble Igwe pointed out that Christmas for some women means spending all their time in the kitchen and he asked men to “change it”.

“Most Igbo men like to use the Christmas period to show that their wives can cook, nobody is doubting your wife’s ability but she deserves to enjoy the Christmas too. Most of us grew up watching our moms live in the kitchen during this period as guests won’t stop coming. Change it!” 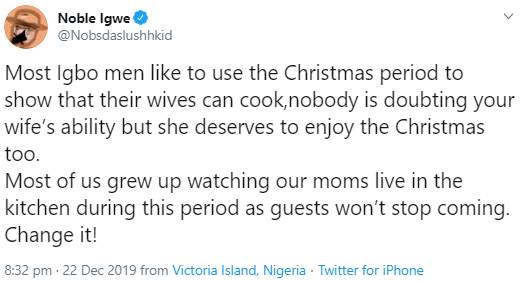