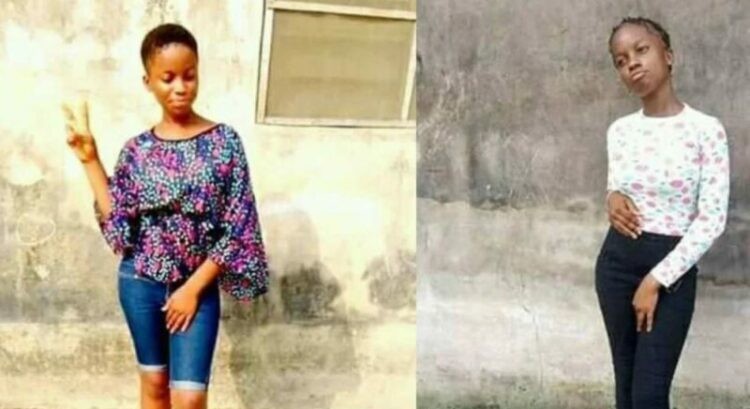 Agility community in Mile 12 area of Lagos state has been thrown into pandemonium after an 18-year-old named Amaka Nweke was reportedly starved and beaten to death by her parents for dating a Yoruba boy.

According to report, she was allegedly beaten to death by her parents, Mr. and Mrs. Mike Nweke, for dating and having a baby for a Muslim Yoruba boy in Agility, Mile 2 in Lagos.

The Lagos State Police Command confirmed the incident, said it is waiting for medical report to ascertain the cause of her death, although, irate residents of Agility, Mile 12 claim her parents repeatedly subjected Amaka to torture, including starving her during pregnancy.

Amaka and her boyfriend, Ibrahim Lawal, were said to have met when she was in Senior Secondary School. The relationship later resulted into pregnancy, which her parents kicked against. She later delivered a baby boy, christened Zaeed.

Her friends claim Amaka went through hell while pregnant for defying her parents.

One of the Nwekes’ neighbours, Adebola, said;

“Amaka went through a lot. She really suffered. When they were dating, her parents were always threatening her.

They told her that they didn’t want her to continue associating with the boy. They used to beat her with different objects even while she was pregnant. Whenever her boyfriend brought food to her, they would not allow her to have access to it.”

When Amaka was delivered of her baby, her parents couldn’t afford the medical bill. They had to call on Ibrahim’s family and they gladly paid up.

After she was released from the hospital, her parents tried to prevent the boy’s family from naming their grandchild. But it took the intervention of the Chairman of the Community Development Association (CDA) and some elders in the area before the Nwekes released the baby to them.

Ibrahim’s mother, Ebunola, said that she reported the repeated beatings to the police. She said:

“When my son impregnated Amaka, I didn’t reject the pregnancy.

I was already used to seeing them together. On January 1, 2020, she called Ibrahim that her mother had started beating her again for collecting clothes and money from us. .

It was during the beating that she became unconscious and later confirmed death at the #Gbagada General Hospital.”