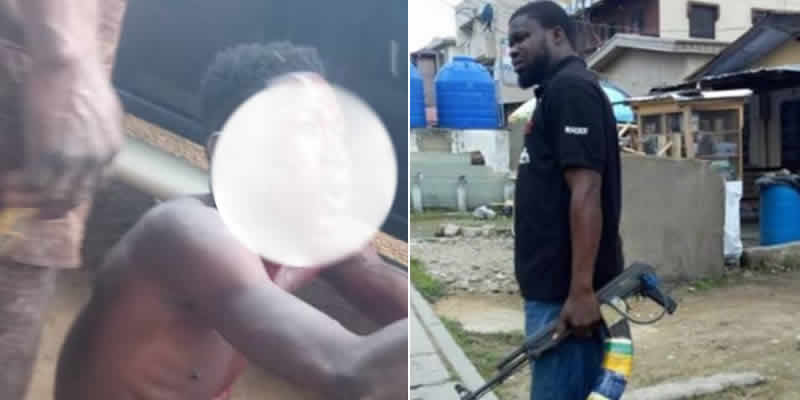 A gory incident happened around the evening period of Saturday, 4th of January, after an angry mob pounced on a suspected thief in Ogbomoso area of Oyo State.

The suspect was accused of stealing Two Hundred Thousand Naira (N200,000), he was beaten to pulp and when intervening officers from the State’s Special Anti Robbery Squad (SARS) saw his sustained injuries, they were afraid that the suspect may die soon if admitted in their custody.

Narrating the incident, Daniel Adedigba, who witnessed the scene of jungle justice wrote:

“January 4, 2020 at about, 5:15pm in Ogbomoso, Oyo State, I saw a new twist to the Administration of Criminal Justice. I was on the queue at a Gtbank ATM just in front of a major road linking Ogbomoso to Oyo when I saw a naked man running and gasping for air.

“The poor guy had been alleged of stealing two hundred thousand naira (N200,000) in a shop nearby, stripped naked and in the course of being beaten, took to his heels. In the twinkle of an eye, I saw some young men as well as some motorcyclists in pursuit. As though the accused had a special training in ‘escaping’, the long list of chasers could not catch him.

“At some point, he made a U-Turn, ran into the ATM section of the bank, receiving beatings on the run yet not caught. The occasioned ruggedness of the accused had already awakened more pursuers to the extent that it became obvious the guy would be caught.

” Some persons close to me linked the Special Anti-Robbery Squad (SARS), Oyo Command. In what was to me a commendable response by the SARS team, there was blasting of siren in few minutes. The team was however clogged by the heavy traffic on the road which led to a little delay to the scene where the accused was held down.

“Before getting to the scene where the accused person was pinned down, the accused had already been brutalised to the expense of losing blood from his palm, head and shoulder.

“In no time, the SARS team drove off and mentioned that if the victim of the theft was ready to pursue the matter, she should treat the accused of the sustained injuries and bring him to their station.

“The team drove off leaving the accused behind. The matter was then left in the hand of several public commentators, self-acclaimed judges and opinionated rabble rousers throwing different opinions and options. In the long run, they agreed in unison that the accused person be left to go on his own as no one was ready to treat him for the matter to be prosecuted.