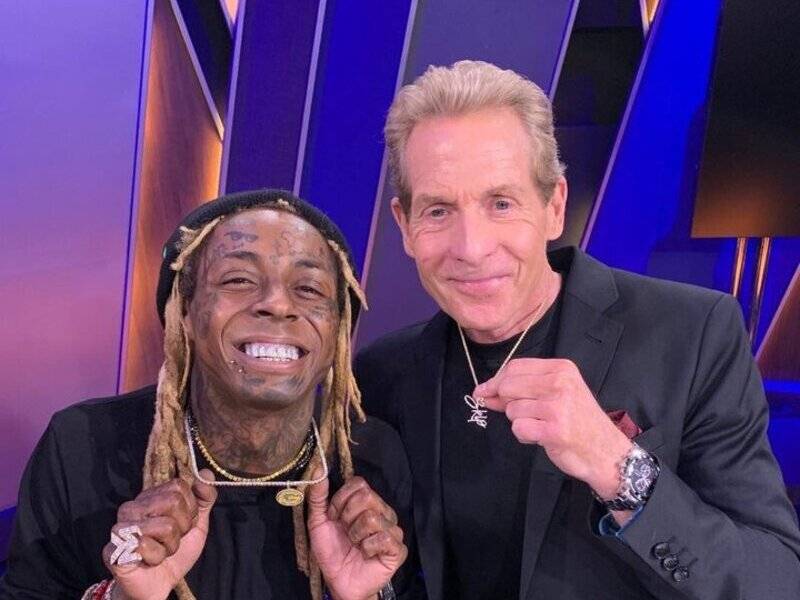 Fox Sports 1 personality Skip Bayless revealed some of his text messages from Lil Wayne and dissed Fabolous‘ debate skills on Complex’s Hot Ones.

Bayless and his Undisputed co-host Shannon Sharpe were promoting their show on an episode of the popular web series. While playing “Truth or Dab,” Bayless was asked by Hot Ones host Sean Evans about his last text message exchange with Wayne.

“I’ll do two in a row,” he said. “Two nights ago, he had returned from doing his first and only gig in Saudi Arabia, and it was over the Thanksgiving holiday. And we must’ve texted 20 times back and forth about what Saudi Arabia was really like.”

He added, “He said this guy named Your Excellency had come to his hotel suite and promised to send him either a Ferrari or Lamborghini. And he said, ‘Which would you like, Wayne?’ and Wayne said, ‘I’ll take a Lambo.’ And the guy said, ‘The Lamborghini will be at your doorstep at Miami in three weeks.”

Lil Wayne and I after he stole the show on today’s Undisputed. I am proudly displaying the drip he gave me. Thank you, brother. #DripBayless pic.twitter.com/mF2sRQadsa

Bayless then opened up about the second exchange.

“It just happened that yesterday was my birthday, and he sent me several [photos],” he recalled. “He told me when we’re [Bayless and Sharpe] in Miami for the Super Bowl, ‘The Lambo is yours. Just for the week.’”

Later on, Bayless was asked about who was the weakest guest debater he’s ever faced. He took it back to his former show, ESPN’s First Take, and named Fabolous as the one that came to mind.

“I’d hate to say because I like him, but my man Fabolous,” the pundit stated.

Bayless noted, “He’s got no sports knowledge at all. He was struggling from question one. But he’s a guy you don’t want to mess with, so you don’t challenge him on the air. Maybe he would challenge you off the air.”