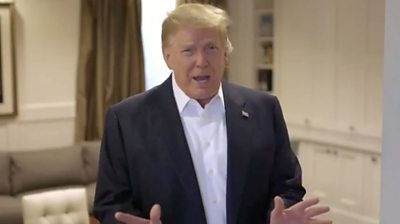 Speaking from the Walter Reed Medical Center on Sunday, Donald Trump described his treatment as the ‘real school not the books school’.

The US president also made a surprise public appearance in a drive-past to greet supporters outside the hospital.

He is being treated for Covid-19, receiving steroids, and his oxygen level dipped twice.

The president’s diagnosis, which he made public in a tweet early on Friday, has upended his election campaign. Mr Trump faces Democratic challenger Joe Biden on 3 November.