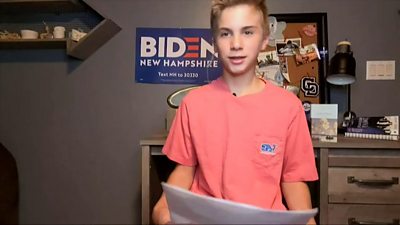 A 13-year-old who was helped with his stutter by Joe Biden, says it’s “just crazy how far the president-elect has come”.

Mr Biden told Brayden Harrington they were “members of the same club” when they met in New Hampshire earlier this year.

The president-elect has spoken about his childhood stutter in the past.

In August, Brayden gave a recorded speech to the Democratic convention to explain how Joe Biden inspired him to overcome his fears.

Speaking to BBC News, the teenager said he was “rooting for Mr Biden” following his win.

And he had some advice for his inauguration speech.

“If he gets a block, or if he has a little moment, then he just needs to do what he does best and go through it.”