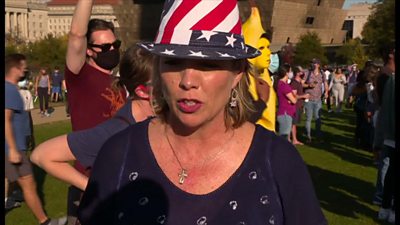 There may have been joy among supporters of Democrat Joe Biden, but for Republicans it has been a different story.

The BBC’s Jane O’Brien spoke to some of Donald Trump’s supporters at a demonstration in Washington DC about their thoughts on the election result.

One of those she spoke to said she was “very concerned about fraud” – President Trump has alleged irregularities in counting, but has not presented any evidence of election fraud.